In our last post on floral tattoos we took a closer look at the symbolism of the very classic rose motive. But there are, naturally, so many other beautiful flowers to choose from when planning your tattoo design. Some you may hear of, or see, on a regular basis, and others more rare and unusual. Let’s dive a little deeper into the floral kingdom, and perhaps you will find some inspiration for your next piece of body art.

The Alstroemeria is commonly referred to as the Lily of the Incas, and are native to South America. It symbolises abundance in wealth as well as fortune, but also represents good friendship and brings luck in romantic relationships. This differs from other lilies which commonly represent modesty and fertility, often portraying new life and birth. However, they can also be linked to the other end of the story, depicting comfort as we move towards the end of our lives.

The Ambrosia flower may share its name with the food of the Greek gods, delivered to Mount Olympos every morning and giving immortality to whoever consumed it. However, it has come to represent love and devotion. The Victorians used it as part of the flower language of the era to symbolise reciprocated love between two people. 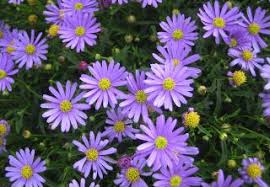 Aster flowers have become more and more popular as tattoo requests. Its name comes from the Greek word for star, given the star-like shape of its flowers. Asters represent the whole gambit of love, wisdom, and faith. It was also often placed at the the altars of the gods in ancient Greece, conveying devotion and affection.

Amaryllis is the flower of artistic and creative endeavours and success, particularly that have come about as a result of hard work. It is also said to encourage a connection to the artistic muse, as well as celebrate achievements in the arts. If you are a creative, an amaryllis tattoo would be the perfect way of staying connected to your inspiration while acknowledging what you have already accomplished.

Not one for the Black and Grey crowd, the exuberant Bird of Paradise, native to South Africa, sparkles with a wide variety of meaning – freedom, opportunity, identity, faithfulness, joy, and, the bliss of paradise. And what better way to indulge in exultant and joyful colours than to add a Bird of Paradise to your tattoo collection. Sometimes, they are also said to represent royalty and regality.

The delicate spring flower bluebell is native to Western Europe and particularly prevalent in the UK. There is a wealth of folklore surrounding bluebells, mostly in retelling of darker fairy magic. In the language of flowers however, bluebells symbolise humility, constancy, gratitude and everlasting love.