Just last week, renowned tattoo artist Fuzi released the first issue of Seulment Pour La Vie, a magazine dedicated to contemporary tattooing. It sets out to show how tattooing has come to embrace almost every other area connected to the arts, such as photography, graphic design, graffiti, and architecture. 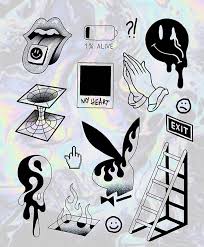 Fuzi himself started out as a graffiti artist, and pioneered the so-called ‘ignorant tattoos’ in the 90s a style that is once again gaining in popularity. It is characterised by cartoon-like imagery with bold linework and zero colour, old-school stick-and-pokes and designs that have fun with tattoo imagery that may have become overly popular in the past. It plays with humour and even sarcasm and is highly stylised, often reminiscent of old school prison or Russian tattoos, styles that were prevalent in Western tattooing before it went mainstream. It might not be for everyone, but there are a range of more accessible tendencies to look to for the year ahead.

On one end of the spectrum, the minimalist trend that has taken off in the later part of the 2010s, shows no sign of fading. Making use of elegant black lines and negative space, minimalist tattoo styles are clean and simple. The designs range from tiny to expansive, but in general they convey a more subtle aesthetic.The simplicity theme is also evident in the trend of imperfect illustrations, often in the form of scribbled and elevated doodles, enhanced with a dash of colour somewhere within — or around — the lines.

On the other end, the 20s will continue see a rise in maximalism in the use of colour. From saturated vivid reds, greens, blues and yellows to pink and turquoise pastels, colour is being used as an element for a new take on styles such as American Traditional and Grunge. The request for simple red ink, as opposed to black, has also been increasing of late and it’s believed to have a real moment in 2020.

Somewhere between the two is a South Korean style making its way around the globe through artists’ instagram pages. They tend to be borderline minimalist, with single-needle linework and delicate watercolour blends. Some simply use colours instead of outlines, creating soft and real looking florals. Flowers have always been popular, but now the requests tend to lean towards them looking as realistic as possible.

Just as there are trends in styles, so there are tendencies in the placement of tattoos, perhaps never more than after the rise of the Insta-ink. Specifically the upper side hip has become a popular place for women to exhibit larger scale mandalas, florals and geometric patterns, as a result of hashtag-culture. 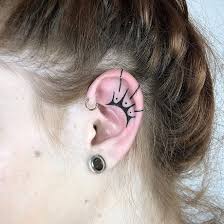 Small behind-the-ear tattoos have been seen for a long time, but now artists are getting asked more and more often to place their work on the actual ear. Musical notes, flowers, and even small mandalas now grace the mostly cartilage-based structure. Some report it to be a very painful place to get inked, if only for the incessantly loud noise from the machine, and the intense vibrations in the skull. Rihanna has one, and considering what she did for the popularity of the underboob tattoo, we will keep seeing more or them.

Also made popular by more and more celebrities sporting them, hand tattoos are making their way into mainstream culture. One of the most prominent trends of the past year, it shows no sign of slowing down. According to accounts of those who have dared, they are somewhat more painful than the recently very trendy finger tattoos, and motives tend to be abstract floral, skulls, animal heads and mandala patterns. But as it will definitely be on display more than other tattoos you could get, you want to make sure it will be something that you really love.