Today we see tattoos mostly as a form of self-expression and individuality. A way to tell our unique story to the world, and to honour our one-of-a-kind embodied experience on this planet. While some have returned to the ancient mystical essence of tattooing by exploring the realms of for instance sacred geometry, most tattooing today is done for aesthetic and artistic reasons. Once upon a time, however, tattoos were thought to be the channels of worlds inhabited by ancestors, spirits, and deities.

For thousands of years, almost all those who practised the art of tattooing also practised some kind of shamanism. While traditionally associated with Siberia and Northern Asia, there are elements of shamanism in all of the 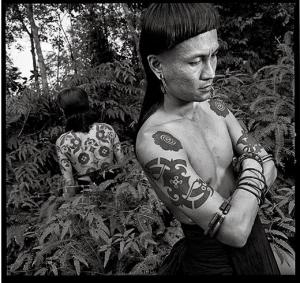 world’s indigenous rites, rituals and belief systems. It is a spiritual practice where the practitioner, the shaman, interacts with the spirit world through altered states of consciousness, induced by mind-altering substances present in nature, or drums, rhythms, and dancing.

The shaman could contact both benevolent and less positively inclined spirits. Death, nature, plants, animals, mystery and magic were all central to the role of the shaman, and the connection of the tribe to all of the above. Shamanism, like many indigenous cultures, is a form of animism —  the belief that all forms of life are imbued with spirit, and spiritual qualities.

Tattooing was performed by the shamans as it was believed to open up supernatural channels, the endurance of pain and sacrificing of one’s flesh making it into a sacred ritual. Not all tribal tattooists were official shamans, but almost all were some form of a traditional healer. The medicinal applications of tattoos could be either to draw out bad spirits from particular affected places on the body, or to mask and hide those places from bad juju waiting somewhere in the shadows to attach themselves. Faces and forearms were adorned with swirling patterns to confuse demons and evil spirits trying to enter the body of the wearer. Tattoos could also be applied to wrists or hands to prevent the soul from leaving the body through the upper extremities.

Other symbols and motives were thought to lend their qualities and powers to the wearer. Tattoos were not only done to ward off evil spirits, but also to welcome good ones. Women often received fertility tattoos to assist in procreation. They would also have tattoos as pure beautification, as permanent jewellery, for example in the place of necklaces. Many women who still have traditional tattoos, such as those of the Kalinga province in the Philippines, also claim that when adorned with certain powerful designs, their skin stays entirely wrinkle-free.

Flowers would symbolise spiritual powers and relationships. Special markings could indicate that someone was a successful headhunter, and denote their characteristics and strength in combat.

Even the tools themselves were thought to proffer spiritual energy and magic protection. The handpoking ‘needles’ would be ornamented with heads of different animals, each lending their strengths and elements to the person receiving the tattoo.