A History of Tattooing Tools

A History Of Tattooing Tools — Ancient Tools and Techniques

The oldest preserved tattoo kit, found on the island of Tongpatu in Tonga, is a somewhat more quiet ancestor to its modern counterpart. Dated at 2,700 years old, the tools have been identified as ‘bone combs’, flat pieces of bone that have been shaped to have sharp points on one side. These points still have tiny bits of ink, and so there is no doubt as to their usage. The pieces were first discovered by archeologists in the 1960s, but at the time could not be identified and they were kept in storage until recently. Some of the bones have been determined as belonging to sea birds, but some are, as far as can be made out, human. As many Pacific islands have always held tattooing in high regard, even seeing it as a spiritual practice, the scientists believe it is highly possible that people would have gotten inked using the bones of their ancestors…

The world’s oldest still trading tattoo shop is found in Copenhagen, Denmark. It opened its doors in the late 19th century on a street called Nyhavn, at the time famous as a hangout spot for sailors, prostitutes and people who just generally enjoyed their drink. It was run at the time by a man dubbed as Ink-Hans. Today, the shop’s punters are met instead by tourists strolling along the street, and a sign that reads ‘Tattoo-Ole’. The name is taken from a previous proprietor of the establishment, Ole Hansen. In 1951, King Fredrik IX of Denmark had his picture taken without his shirt for LIFE magazine, displaying works by Ole and other of the studio’s tattooists. This lead to tattoos being generally accepted in Denmark way ahead of most other European countries.

The oldest tattoo artist still alive is Whang-Od Ogay, a Filipina tattoo artist born in 1917. Yes, she is 102 years old and still pounding skin. She is a mambabatok, a traditional kalinga tattoo artist, keeping the craft alive in a little village a 15-hour drive and a miles hike north of Manila. She makes her own ink every morning from pine-soot and water, that she then applies with a thorn made from a pomelo tree, a foot-long bamboo stick used as a hammer, coal and water in a variety of motifs on the skin of those dedicated enough to make the journey. In her later years, she has reportedly become more and more choosy about who she will tattoo, but has begun training a number of girls from the village in the art. The youngest one only 8 years old! 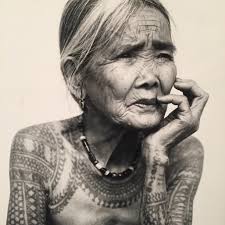 From the tombs of ancient Egypt to the streets of 19th century Copenhagen and the hilltop villages of the Philippines, anyone offering up a piece of their skin to the artist’s needle, or otherwise participating in the tattoo trade, is a part of a millennia old living and tradition, active co-creators of where it will go from here. All in our own entirely unique way. Even if we won’t choose to get mummified, that is something to pay homage to.