Since we mentioned laser removal in the last blog, as a means to making it easier to get a good cover up result, we thought we’d take a look at the actual science behind it. In this first part, we get a little nerdy on history. In the next post, we will dig deeper into what actually occurs when that laser hits the skin.

As you know from this previous instalment, there is a specific physiological response that occurs when the tattoo needle pushes ink beneath the top layer of the skin into the underlying dermis. But here is a quick recap.

Your immune system sounds its intruder-alert alarm and sends white blood cells to deal with the inky invaders. The pigment gets trapped in the cells, and while some travel out through the lymph nodes, larger pigment pieces remain suspended in the dermis, along with pigment absorbed by cells called fibroblasts. This is what makes the ink stay put on, or rather, in, your body.

Tattoos used to be thought of as entirely permanent (or dangerously and excruciatingly removed). However, with the advent of laser tattoo removal, a potential, albeit costly, opt-out has presented itself.

While there is an existing notion that laser tattoo removal is very painful, most people describe it as generating no more discomfort than getting a tattoo in the first place. And compared to other tattoo eradication procedures, it definitely seems to be the more appealing one.

One method often used by those needing to get rid of old ink, let’s say criminals who did not want to be identified by their unique markings, was that of dermabrasion. This involves removing as deep a layer of the skin as possible (without cutting it off) with a rough object such as a wire brush. It would often expose the individual to infections. There were also methods where salt, chemicals such as tannic acid and silver nitrate, or cryogenic techniques were used. Some would remove the skin entirely and cover the area with a skin graft. All of these methods left burns, disfiguration and lots of scarring.

First laser removal in the 1960s 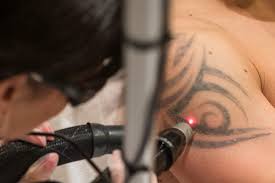 Then, the very first laser tattoo removal happened in 1967, when a Dr Leon Goldman used two different kinds of lasers to get rid of a client’s old ink. However, the early versions of the method remained unsafe as well as ineffective, until a kind of nanosecond laser known as the Q-switch became available in the 1990s.

They produce short pulses with high levels of energy and can break down several different colour pigments. While these kinds of lasers are still used by many tattoo removers, they require quite a few sessions to get good results. And they may not get to all of the pigment.

However, now there is something called picosecond lasers commercially available. They have a pulse range less than a nanosecond – that means under one thousand-million of a second. As such, they are not only more efficient in removing different coloured ink, but they also produce less tissue damage than their predecessors.

Check back again later this week to learn how laser removal actually works!