The Agora of Ink – Tattoo Conventions part I

The Agora of Ink – Tattoo Conventions part I

Since Ancient Greece, the agora, the public market place, has been at the heart of community life.  The interaction that took place went beyond daily transactions, spawning an exchange of ideas that changed the world for the people around them. To this day they influence what we take for granted about society. The freedoms however, had their limits. The philosopher Socrates was charged and condemned for ‘corrupting the mind of the youth’ of Athens and of impiety, ‘not believing in the gods of the state’. The Athenian rulers sentenced him to death through poison.

Countercultural movements and that which is viewed with suspicion or as disruptive by the state has always been denied a place in the public. Therefor, there is nothing so symbolic of the embrace of tattoo culture by the mainstream, as the proliferation of the modern day tattooing agora — the tattoo convention. 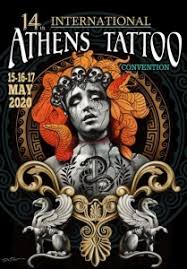 The world’s first tattoo convention was organised by tattoo legends Lyle Tuttle and Dave Yurkew on January 24-25 1976 in Houston Texas. Lyle Tuttle has been quoted saying that it was the event that ‘changed tattooing forever’. Today, there are over 1000 tattoo conventions world wide. They have become overt celebrations of an art form that used to have to hide in the shadows. The once underground practice of customising your skin as a from of self-expression has become a multi-billion dollar industry, and its market place has expanded along with its astronomical growth in popularity.

Exhibition style events where each artist has their own booth, tattoo conventions range from small, one-day events sponsored by a local business, to large international affairs with big names. They take place in hotels or large scale conference centres and can last a weekend or the better part of a week. Often, they showcase several hundreds of artists. They offer artists and tattoo lovers a chance to meet other like-minded people and often feature live music performances and shows.

One major draw for artists are the competitions, mostly for tattoos started and completed during the convention or even on one specific day. Categories range from Best Realism, Best Small Colour and Best Large Black and Grey, to Best Chest tattoo, Best Portrait and, of course, Best of Show. For artists, other than for showcasing their work, they can be incredible opportunities for networking. It is possible to make connections that lead to mentorships or long-term global collaborations, or to secure guest spots around the world. This way, they can expand their art to a much wider audience and clientele.

Local artists get a chance to learn from visiting masters, through watching them work up close in live tattooing demos, or through workshops and seminars. For newer artists, they are a chance to get their work noticed by studio owners and new potential clients and canvases, as well as a chance at direct revenue from the actual on-site tattooing, of course. They are also gathering and market places for all things ink-related, such as equipment suppliers, apparel, jewellery and more.