Ink and the MCU

In 2018, the Canadian Marvel fan Rick Scolamiero became the record holder of ‘Most Marvel comic book characters tattooed on the body’. It is unclear exactly when this category was instated… But safe to say it could be a long time before Rick’s record is challenged. Rick got his first tattoo done only in 2011, so over the course of 7 years he has gotten tattooed once a month. For a total of over 350 hours. (Superheroes are not his only motives.)

Initially, he planned for a sleeve with a few select heroes… Now, among others, he has Black Widow on his lower left abdomen- Deadpool on his right inside ankle. Iron Man on his right outer quad, and Wolverine on his left inner forearm. His first? Spider-man. Left outer forearm. He has also tattooed the autograph of Stan Lee, legendary co-creator of Marvel’s characters, after having the latter sign his wrist during an encounter. Apparently, the most painful heroes were the Hulk and Black Cat, both adorning an inner thigh each. The tattoos were done by Tony Sklepic of Sanitarium Studios in Edmonton, Canada.

Longest tattoo session (on multiple people) was held for a brief month in 2017 by the Italian artist Allesandro Bonacorsi, aka ‘Alle Tattoo’. In January 2017 he inked 28 tattoos over a continuous period of 57 hours, 25 minutes and 30 seconds. This was the fourth time that ‘Alle’ took the record, having had it stolen in 2016 with 56 hours and 30 minutes by the Polish artist Krzysztof Barnas. However, already in February 2017, Robin H.M, an artist from Ohio, US, broke the record. She first broke the Longest tattoo session on a single person, and then continued with more people. 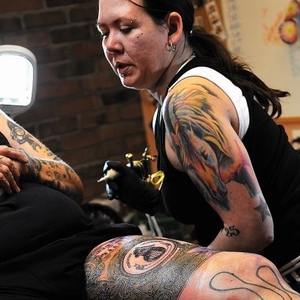 First, she tattooed collector Jeff Garton for 48 hours and 26 minutes, she then continued tattooing other people for a staggering total of 72 hours and 26 minutes. Robin attributes her feat to the support she got from her team in training and nutrition, including sleep deprivation exercises. However, together with fellow Italian artist Serena Cavani, Alle Tattoo still holds the record for longest tattoo session done by two people. It lasted for 60 hours from the 14th to the 16th of February in 2018.

There are also some really cool firsts. Like ‘First prosthetic tattoo gun arm’, worn by JC Sheitan Tenet, and made by JL Gonzal. Sheitan Tenet lost his right arm from just below the elbow when he was only a child. He had up until that point, been right-handed. Not letting that hold him back from becoming an artist, he learned to draw with his left hand, and progressed from there to tattooing. JC had a hard time finding someone to take him on as an apprentice. However after meeting JL Gonzal at conventions, they began exploring ways in which JC could tattoo using his right hand.

Gonzal fitted a tattoo gun onto an old prosthetic arm, with disposable needle, griptube, nipple and rubber. It is not JC’s daily tattooing tool, due to the amount of time it takes to clean. It has been fitted with parts from a typewriter and an old gramophone and painted with a particular varnish to give it a worn, steampunk like appearance.